The fatal terrorist attack in Reading on Saturday, killing three people and injuring others, must act as a wake-up call to the security risks that COVID-19 is exacerbating.

The socio-economic pressures of COVID-19 are creating an environment suited to harbouring the motivations of both jihadist and right-wing terrorism, particularly in the form of solo actors using comparatively basic tactics.

On-line radicalisation on chatrooms and, more dangerously, secure chat channels; existing mental health issues; community, ethnic, or religions tensions; economic or social hardship; a feeling of separation; and trigger events, such as the Black Lives Matter protests are likely to all play a role in mobilising individuals and groups.

While our measurements show overall terrorist threat levels globally fell between 2016 and the start of 2020, driven by the reduction of Daesh’s heartlands, it has once again risen significantly in the first half of 2020. This includes a steadily increasing level of activity from right wing terror groups.

Historically, such groups have been overlooked in comparison to the Islamist terror threat. Yet, organisations such as The Base -- supported by the Russian state as part of a multi-pronged approach to destabilising adversaries -- are focused on coordinating and inspiring a new generation of recruits to white supremacy. This is poses a significant challenge for Western states, since the line between patriotism and excessive nationalism is easily blurred, making identification and disruption more difficult.

Lockdown could not have done more to accelerate these trends. Although the situation meant there were fewer targets (as people stayed away from crowded places), more chance of being noticed if out and about, and little opportunity to gather supplies, this has also kept potential actors at home, making them a captive audience for internet sources enhancing disenfranchisement and radicalisation. In this light, the attack in Reading is not an isolated event; not far away, in Eastleigh, UK, the youngest ever person to face terrorism charges spent lockdown seeking to build explosive devices following conversion to Islam.

Drivers for radicalisation take many forms, but it is unsurprising that awareness of stark social injustices is rising further to the fore, and terrorism haunts the far fringes of this trend.

For example, both al-Qaeda and Daesh have focused on Black Lives Matter and events in the US. Following their established patterns of approach, al-Qaeda has sought to portray itself as a supporter of the protests and as a movement that is seeking to combat Western hypocrisy, while Daesh has adopted more of a gloating approach. In both cases, the jihadists agree that this is a further sign of why their cause is ‘just’. Although al-Qaeda’s position as a supporter of Black Lives Matter is a stretch, they only need convince a few people. These groups will continue to capitalise on such events.

This stance of course also adds further ammunition to the far right, who will combine their racism with fears of Islamisation and the decay of society. Leaked material from The Base shows that the US and UK are seen as fertile ground for recruitment. The security forces themselves, especially the military, are being targeted, proving to be vulnerable. The line from patriotism to extremism can be worryingly narrow, and trained recruits within the security apparatus are obviously proportionally more dangerous.

It follows that the scene is set for a fertile feedback cycle, where the same motivations are driving activity across an opposing spectrum of beliefs, with a shared (albeit tacit) interest in destabilising Western societies. The likelihood of increased hardship and societal confrontation over the coming years is exacerbated by countries including Russia that are seeking to gain global advantage. Meanwhile, the post-lockdown environment creates a range of new targets, not least in the form of queues on the streets, and fragile public confidence means any incidents will have a greater impact. In the face of declining security budgets and over-stretch of resources, and while being confronted by increasingly motivated adversaries with time and technology help them recruit, we once again face an increasingly dangerous threat environment. 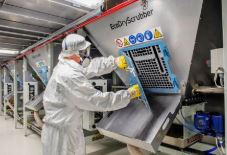