The confluence of secondary peril losses, geopolitical turmoil and reset macroeconomic fundamentals have led to a US$46bn reduction in capital at 1H22 and a projected year-end decline for the first time since the global financial crisis, according to a report from Howden.

The broker’s report, published today ahead of the Monte Carlo Rendez-Vous, reflects structural shifts in supply and demand dynamics in the market, which it describes as having reached a ‘tipping point’.

Howden’s research demonstrates how climate, conflict and capital are coalescing to create this situation, as 2022 mid-year renewals see rate increases accelerate to their highest levels since 2006.

Having initially stood firm in the face of headwinds that began in 2017, persistent catastrophe loss frequency and major macroeconomic and geopolitical realignments this year have exacerbated pressures and altered assumptions around yields, capital and loss costs.

Bradley Maltese, CEO, Howden Re said: “After years of excess capacity, loss uncertainty and the changing world order have combined to create some of the most challenging market conditions in two decades. Pricing and risk appetites are responding accordingly. No two cycles are the same, however, and new capacity could very soon be enticed into the market, given current rating levels and the higher potential returns on offer.

“Capital providers’ price expectations have continued to shift in line with structural changes to the loss environment, meaning that 2023’s reinsurance renewal cycle is likely to see further pricing pressures. Loss experience from here will be crucial: whilst pressure will increase if the wind blows this year, it will be more muted off the back of a loss-free second half. Choosing your intermediary carefully is essential in helping cedents secure the best and most cost effective coverage available in the current environment.”

The property-catastrophe market is currently in the eye of a price, risk and inflation storm, and reduced capital inflows, along with rising ‘secondary’ peril losses, the three-year average of which has nearly doubled since 2013, have strengthened reinsurers’ resolve to meet rising costs of capital.

All of these factors are starting to tell, with signs of distress at mid-year renewals, according to Howden’s report. Property-catastrophe pricing for Florida business rose by an average of 25% at 1 June. A cumulative increase of 90% in the last five years has seen Howden’s 1st June ROL index rise to its highest level since 2007.

Whilst Ukraine war claims are likely manageable overall for the re/insurance sector, the concentration of losses amongst premium-light lines of business will lead to disproportionate pain, according to the report. Current industry loss expectations range from US$10bn at the low end to upwards of US$20bn; reported claims (of US$2.5bn to date) have a long way to travel before they get close to these figures, Howden asserts. With unexpected war losses coming fast on the heels of unexpected pandemic losses from Covid-19, reinsurers’ exposure to loss aggregation in such a volatile risk landscape has contributed to the transitioning reinsurance cycle in 2022. Both events have revealed how perils once regarded as ‘distinct’, such as business interruption, supply chain failures and price shocks, can be connected and strike simultaneously.

Capital impacts have been significant, as asset markets adjust to the end of the ‘great moderation’. 2022 already represents a local low for dedicated reinsurance capital. An 11% impairment during the first six months of the year, together with significantly higher premiums, sent the sector’s solvency margin ratio (capital divided by premiums) back to levels last recorded in the depths of the global financial crisis. Even assuming a recovery in financial markets in the second half, which is far from assured, capital losses are unlikely to recover fully this year. Any year-on-year decline in reinsurance capital at the end of the December would represent the first full year reversal since 2008, and provide further impetus for market firming, according to the report.

Elliot Richardson, chairman, Howden Re commented: “Unlocking capital in order to find solutions for risks that may soon outgrow the sector’s capital base will be crucial to maintaining relevance and offering clients coverage that meets their rapidly changing needs. Clients demand better data, world class analytics, scale and a unique blend of capital markets and risk transfer. In these market conditions, clients need a new approach to broking that is innovative, aggressively entrepreneurial and home to the sector’s strongest talent. In 2023, Howden Tiger will be delivering just that.” 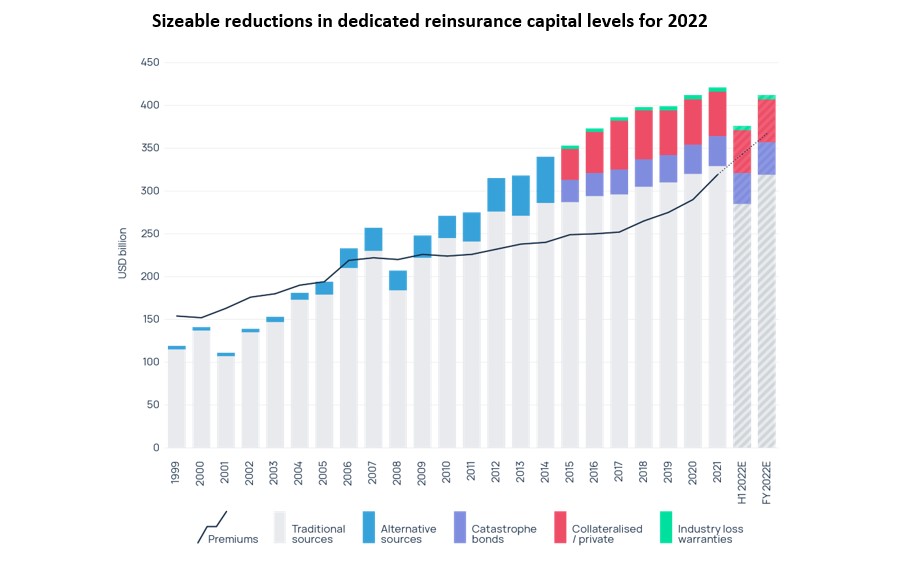