As protests in Hong Kong move into their 22nd week, some firms have opted to hold off sending staff to this important economic region.

The targeting by protesters of the transportation infrastructure adds another level of uncertainty for business travellers and their employers, with many metro stations having been closed on the island.

And, following a worsening of the situation in recent weeks, the Hong Kong Government announced that, in certain circumstances, it may not be permitted for individuals to wear a “facial covering” which might prevent identification. There are also reports of greater scrutiny from mainland authorities at border crossings between the mainland and Hong Kong, including checks on travellers’ electronic devices

Global threat analyst for the Asia-Pacific region at travel risk management provider, Healix International, says Hong Kong is generally considered as a low security risk country, but that recent developments call for a change to measures employed by companies operating in the area.

“Recent large-scale demonstrations and violent clashes between police and protestors – which are showing no sign of abating – have left some employers uncertain about the scale of the risks and what guidance to give to employees. In particular, the risk of foreign nationals being caught up in the protests has increased as it is difficult to predict the next protest location. The protesters have employed ‘hit and run’ tactics to avoid prolonged confrontation with the police and have been vandalising metro stations and damaging the transportation infrastructure. And all of this adds to the risk levels for employers.

“As well as providing businesses with employees in the region with one to one support as necessary, we have created a hitlist of useful advice that can be shared with workers. The key is maintain vigilance and ensure there are back-up plans for evacuation should employees feel unsafe.”

For those that do opt to fly employees into the region, risk experts are urging employers to apply stringent security measures.

• On protest days, plan routes that bypass the vicinity of protest locations and flashpoints for unrest.

• Be aware of the incidental risk of violence in the event that business-critical journeys through the affected areas is required.

• Protesters are also known to gather at the UK and US diplomatic representations, government facilities, metro and police stations across the territory, and multiple locations in central Hong Kong Island. This includes the Fortress Hill and North Point district, Victoria Park, Edinburgh Place, Chater Garden, Tamar Park, and government buildings such as the Legislative Council Complex, the Central Government Complex, and Revenue Tower.

• Do not stop to watch, film or take photographs of protests owing to the incidental risk of violence. Civilians, journalists and bystanders have increasingly been impacted; the police have admitted to more aggressive tactics, and press staff have been detained and wounded on several occasions

• Developments regarding the ongoing unrest should be closely monitored via social media, local news outlets, the Telegram encrypted messaging platform, and local internet forums, like the LiHKG website

• Black and white clothing has been associated with both protesters and counter-protesters; it’s advisable to refrain from wearing these colours on protest days. Also, limit carrying any items that may give the impression to the authorities of involvement in protests; this includes masks, hard hats and umbrellas

• Refrain from political discussion in public and making statements on social media.


For more on the business impact of ongoing demonstrations in Hong Kong, read our feature, Peak problems, in the current issue. 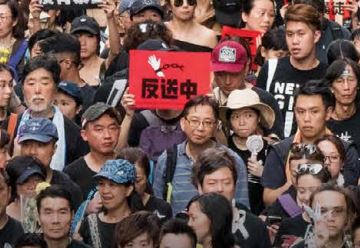